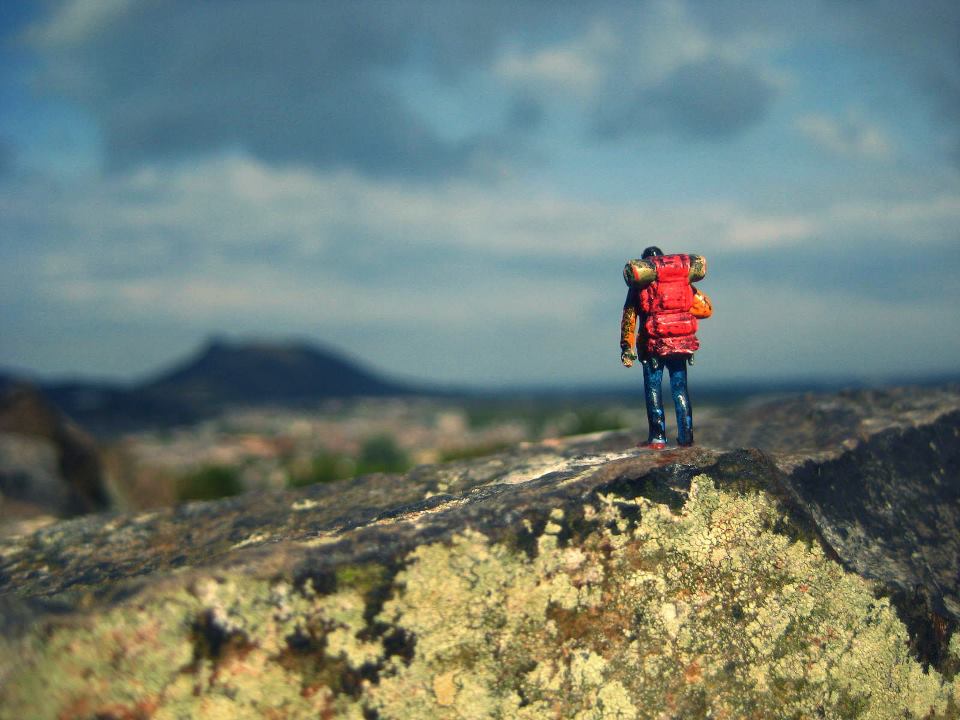 “Subatomic Tourism is an ongoing project to big up the small with a hint of Irwin Allen and Richard Feynman, along with a touch of Marcel Duchamp and Ray Harryhausen; to bring by way of Joseph Cornell and Gerry Anderson a celebration of the wonderful world-sized diorama we find ourselves living in.”

Stop. Take a moment. Open your eyes to your immediate surroundings. Look closer at the details and imagine yourself scaled down to 1:1000 scale. For now you are looking through the eyes of the Museum of Subatomic Tourism.

You have entered their parallel existence, mobilised in thought-provoking scenes all over the UK and scattered as far as greater Europe. The artwork in itself is quite unique conquering scale and perspective in photography though bringing with it a playfully nostalgic edge.

Every image seems to breathe energy into the textures and details of that which we pass unnoticed in our everyday lives. Imagination is set firmly to ‘stimulation’, triggering a long past childhood spirit within you.

Most of the images are carefully scaled so that the subjects look naturally juxtaposed with their surroundings, caricatures frozen in real life. Whilst some of the other offerings are playfully entwined in their true scale with inanimate objects not too dissimilar to TV show ‘Land of the Giants’ (1968-70), giving a new found respect for mammoth offerings such as…. a bacon & egg sandwich.

Touching base with curator Tim Parker we scratch a little deeper into his world:

What drew you to photograph miniatures and how long have you pursued this direction?

I used to go the the old Royal Scottish Museum when I was small, and I was fascinated by all the scale models, from planes to trains, boats to rockets, and I used to try and build my own out of wood and cardboard tubes.  My brother used to build plastic models, and so I started to build my own. I took to the diorama sets that Airfix began to make, and I would always crouch down and look into the scenes I’d make and see things on the small scale, from the plastic soldiers point of view.

I was also very interested in how special effects and models were used in television and motion pictures, and used to read about Ray Harryhausen (Sinbad monsters), Mat Irvine (Dr Who special effects), Gerry Anderson (Creator of Thunderbirds/Stingray) et al sitting in my bedroom half-a-world away from Hollywood seeing how all these fantastic worlds were brought to life. Knowing how the magic was created has never detracted from my enjoyment of them but only increased it. Some of that knowledge has, from time to time, found its way into the photographs.

The museum also had dioramas for animal settings, and I was fascinated by the apparent freezing of time, the recreation of any location on Earth. After I got my degree, I went back to dioramas after seeing a fantastic exhibition by Sandow Birk at the Laguna Art Museum in 2000 that was part-painting, part-diorama. That show was pure theatre drawing from history, painting, and soap operas to build a narrative of a fictitious war between Los Angeles and San Francisco.

I began to draw from that, building small scenes in old toolboxes and typewriter cases inspired by Joseph Cornell. I had discovered the Chapman Brothers, Mark Dion and Mark Collishaw by this time, and when Slinkachu’s book was given to my my other-half I decided to experiment for myself – which is what I’ve been doing with varying degrees of success for the last seven years.

How often do you shoot and where do you draw regular inspiration from?

I decided to make dioramas out of the real world, and focus on that to tell stories. I carry a set of props around with me and my my camera nearly every-time I leave the house, including going to work, and I try to make at least two set-ups a day.

I can have an idea about a scene in a gallery, shop, or within some outdoor setting and build a narrative around that. I’m a fan of science fiction, so I’ve got toys and models from Star Trek, Star Wars and Doctor Who so I bring those down to earth and make it more real by photographing them in familiar, local settings – like Daleks in Leith Docks, or an Imperial Storm-trooper outside Holyrood Palace.

‘Subatomic Tourism’ is an ongoing project for me, and one idea I’ve had is to paint the set-ups instead of photographing them which I find quite exciting.  I take a sketchbook with me as a kind of back-up system, something I’ve done since before I went to art college.

Is there a specific underlying message to your work?

There’s no underlying message, it’s storytelling and theatre, but one where the audience participates with and responds to, each according to their beliefs and experiences, likes and dislikes.

What sort of camera do you use? Do you ever shoot in film?

Later in life I got a Canon Ixus 70 from my partner Tessa for Christmas and I began to investigate that camera’s macro facility, realising the fun I could have.

We notice that you held an exhibition some time last year, are you intending to exhibit again in the near future?

I did have an exhibition the year before last, and it was an oddly satisfying experience to see the work physically on a wall, and not projected on a monitor screen – a bit like seeing the stained glass knight coming alive in Young Sherlock!

To view more of ‘the Museums’ work you should visit:

Begin typing your search above and press return to search. Press Esc to cancel.